The X-chromosome is passed down differently than the other 22 chromosomes. Since men only have one X chromosome, which they get from their mothers, when a man passes his X onto his daughters, he passes an intact X. As women have two X-chromosomes, one from each parent, when she passes her X onto her children, she could either pass along her paternal X, her maternal X, or a mixture (recombination), like with any other chromosome.

According to a study done by Blaine T. Bettinger (The Genetic Genealogist), in 14% of cases, the X-chromosome is passed down intact, with no recombination. Most X-Chromosomes undergo one or two recombinations. Here are the percentages seen among the 250 samples in the study. 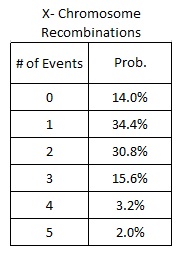 Since I’ve done Visual Phasing using my results, my sister’s and my nephew’s, I thought it would be interesting to see how our X-Chromosomes compare. Here’s the overall view. The bottom shows the match between each of us and my mother. As expected, my sister and I share a full X with our mother (if we didn’t, she couldn’t be our mother!). My nephew does not.

First up, me. As a female, I received two X chromosomes – one from each of my parents. Since my father only had one to give me, from his mother (Sharpe), of course I got his intact. From my mother, I happened to also receive an intact X chromosome with no recombination. I got her maternal (Hicks) X chromosome.

Next is my sister, J. She too got intact chromosomes from both parents, but in her case, she received our mother’s paternal (Prowse) X chromosome. So while we each received an X with no recombination, we received different ones.

And finally, my nephew, R. As a male, he only received one X chromosome, from his mother (my eldest sister). Because of the way I charted them, it looks like this:

But in reality, it’s all on one chromosome, so it would look more like this:

We can see that R’s X chromosome underwent 3 recombinations. From this, we can also see what my eldest sister’s chromosome must have been – something like this:

The recombination point could be anywhere within the red square. Where exactly it occurs is unknown, but we know there is one, and probably only one.

DNA never ceases to fascinate me!

I live in Ottawa, Ontario. You can find me on WikiTree.

A full profile, including sources, for any ancestor I mention on my blog can be found on WikiTree, as this is where I document most of my genealogy research. Follow the links.