This week’s prompt for the 52 Ancestors challenge is “Favourite Name”. I’ve come across some great names in my family tree – names like Snowball, Silver and Submit. But none of these are in my direct line. Oh no, my direct line is full of Williams and Johns and Elizabeths and Sarahs, with the odd biblical name like Hezekiah and Mehitable thrown in for good measure. So I decided this week to go with my 5th great grandfather, Joseph Providence Richardson. While I don’t know a lot about him, what I do know explains the story behind his name.

Joseph was the son of John Christopher Richardson and Mary Flintoff. If you’ve been reading my blog and these names seem familiar, it’s because they were one of the sets of possible parents of another 5th great grandparent, Charlotte Richardson, who was the subject of my Mitochondrial DNA research. But unlike in that case, there is no question that Joseph was their son.

John and Mary were both born in Yorkshire, England and were married 1765 in Hutton Rudby, Mary’s home town. Following the birth of their first two children, they left their homeland for a new life in the Colonies. They were among the over 1,000 immigrants from Yorkshire who settled in the Chignecto Isthmus (the neck of land between Nova Scotia and New Brunswick (Canada) between 1772 and 1775.

In April 1774, John, Mary and their two children, Christopher and Elizabeth, boarded the Providence in Newcastle-Upon-Tyne. There were 72 passengers on board. When it arrived in Halifax, Nova Scotia some 5 weeks later, there were 73.

That newborn, named Joseph Providence Richardson, was my ancestor.

The Richardsons settled in Sackville, New Brunswick, where Joseph became a farmer. He married Jane Patterson and they had 5 daughters and 3 sons, including my 4th great grandfather, John P. Richardson.

Arthur Albert Hicks was my great-grandfather. Although he died before I was born, my mother has often spoken with great fondness of her Grandpa Hicks. He was born on April 22, 1872, in Midgic, New Brunswick, the 6th of John Manning Hicks and Jane Scott‘s 12 children, only 6 of whom survived childhood. Arthur grew up on the family farm and became a farmer, like his father. He and his wife Morinda Wheaton had 8 children, the eldest of which was my maternal grandmother, Bessie Hicks. Arthur died on April 12, 1951, at the age of 78.

This is the only picture I have of Grandpa Hicks. This would have been taken around 1918, as the child in the picture is Arthur’s eldest grandchild, my aunt Audrey, who was born in February 1917. 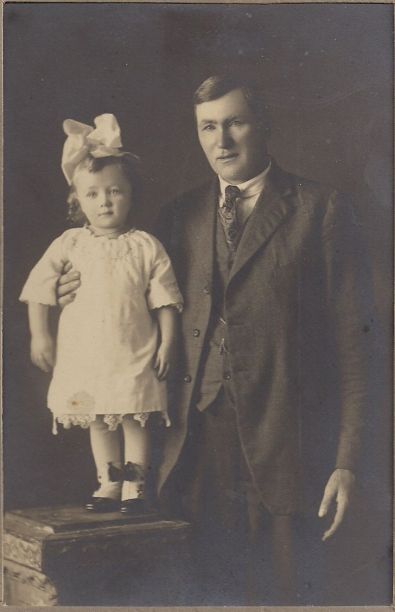 A few years ago, while going through a box of old photos and documents with my mother, we came upon this: 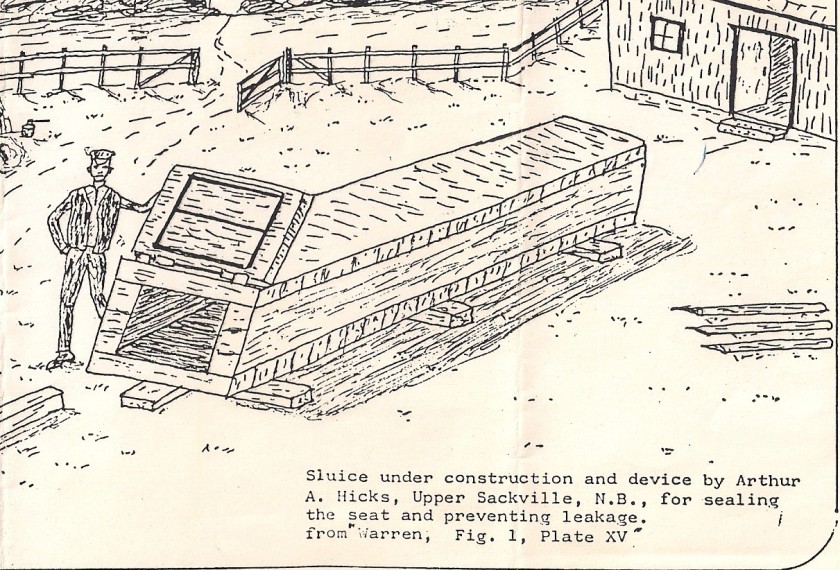 We were intrigued. Mom couldn’t recall where she had gotten this sketch. I contacted the Tantramar Heritage Trust to see if perhaps someone there might have a suggestion as to where I could begin to look to locate the source of this illustration. The Executive Director of the Trust forwarded my email to a few people, one of whom knew exactly who could help. He put me in touch with Colin MacKinnon, a biologist at Environment Canada (now retired) and historian, with a particular interest in marshlands history. Not only did Colin recognize the reference, he actually had a copy!

This 1911 US Department of Agriculture publication contains a chapter called “The Marsh Lands of Nova Scotia and New Brunswick” which describes the various methods used around the Bay of Fundy to turn marshlands into agricultural lands. The section on sluices includes “Arthur A. Hicks of Upper Sackville, New Brunswick, has built a number of sluices equipped with a very simple and effective device for preventing sluice leakage. (See Pl. XV, fig. 1.)”, which goes on to describe this device in great detail.

The best part is that Plate XV, Fig. 1 is not an illustration, it’s an actual photo. 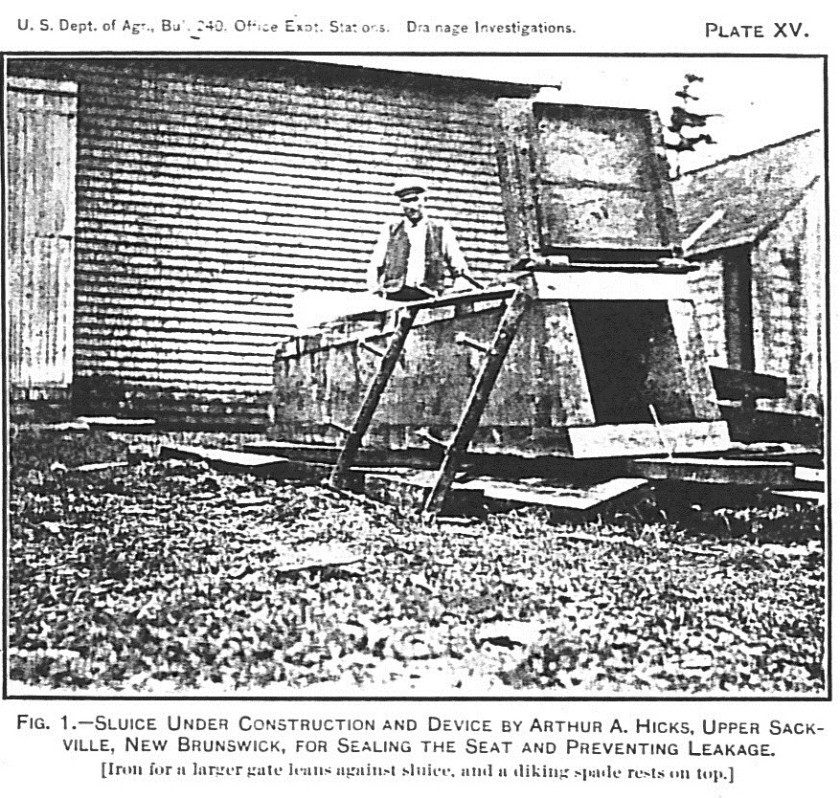 The mystery remains as to who did a sketch of this photo, and why. But I must say, I was impressed that Colin was able to identify the source from the sketch. He clearly knows his marshland resources!

As an added bonus, he had a picture of my great-grandfather’s gravestone which he kindly sent to me.

This was a great reminder that it always pays to reach out to others – you never know who may have a piece of the puzzle. And an added bonus of family history research is that it provides lots of opportunities to learn new things. If you’re interested in knowing more about the history of the Tantramar Marsh, check out Marshland: Records of Life on the Tantramar on the Mount Allison University website.

I live in Ottawa, Ontario. You can find me on WikiTree.

A full profile, including sources, for any ancestor I mention on my blog can be found on WikiTree, as this is where I document most of my genealogy research. Follow the links.